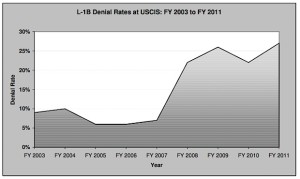 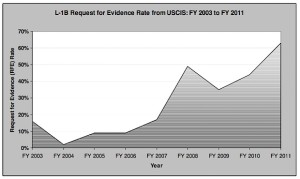 I have read many articles in recent times since what is an anti-immigration and anti-H1B visa (and L-1 vis) legislation was submitted for debate in the US Congress.

The crux of the legislation is the ludicrous notion that 65,000 annual H-1B visas out of a workforce of over 150 million people (CIA figures) have helped be a major cause of the mass unemployment in the US. This equates to 0.4% of annual labor.

Then when you consider according to NASSCOM (National Association of Service and Software Companies), the average foreign engineer on H-1B visa only stays in the US for 2 years which is not even the full term of an H-1B visa which is 3 years.

Suddenly you see how ridiculous all this is and the arguments put forward by Senator Dick Durbin (D-IL) and Senator Chuck Grassley (R-IA) like;
“Some claim that the H-1B program helps to create American jobs, but it is currently being used by some companies to outsource American jobs to foreign countries.”
are all just an anti-immigrant and H-1B visa ruse to distract the US public from who is really to blame for the current  economy.

1. US Politicians who were in bed with corporate America and taking their kick backs, campaign contributions and gifts and providing little or no oversight over mass corruption and breaking of the law

2. US Corporations headed by US Executives (mainly in banking and financial sector) who engaged in practices that would mildly be described as extremely reckless while profiting individually regardless of the damage to their own companies or the general public who engage with them and economy as a whole

3, US Consumers for entering into mortgages they could not afford and racking up tens of thousands of dollars in credit card debt.

It almost reminds you of that Simpson’s episode where Mayor Joe Quimby distracts the public blaming the high taxes on immigrants and the public believes it. The sad thing today is that this is real life and not an animated cartoon on Fox.

For arguments sake lets suppose there proposition that the H-1B visa and immigrants are really taking jobs away from US citizens are argue that statements on its own merits by looking at the facts.

Duke & Harvard University Researcher Vivek Wadhwa who did a study for the Kauffman Group found:

To  go further if that does not convince somebody Yahoo, Google, Sun, Intel, Audiovox, Qualcomm, and eBay – were founded and led by immigrants whose successful companies today employ hundreds of thousands of Americans.

Imagine if all those brands were Chinese, Indian or Heaven Forbid to many Americans, even Arabic where many of these hard working entreprenuers and innovators are from. Would the US even be in it’s top place in the world today?

The study also found that many of the highly educated foreigners who came to the US for undergraduate, graduate and PHD degrees to the top universties in the US paying hundreds of thousands of dollars in fees and spending each are chosing to return home because of the difficulty in obtaining an H-1B visa & more alarmingly the greater entrepreneurial opportunities back at home.

The New York Times recently profiled a young engineer for Google, Sanjay G. Mavinkurve, an Indian-born, American-educated entrepreneur who helped write the code for a website that would become Facebook. But now, Mr. Mavinkurve, who once proudly displayed an American flag in his college dorm room, must work in Canada because visa rules make it impracticable to move his wife and family to the United States.

Let me leave you with these final thoughts;

President Obama has signalled he doesn’t want the US to become an inward, protectionist nation. Well lets hope for all US citizens that holds true and this legislation does not pass as it would the first big dagger into US innovation and supremacy leading the world!